Thou Art The Man 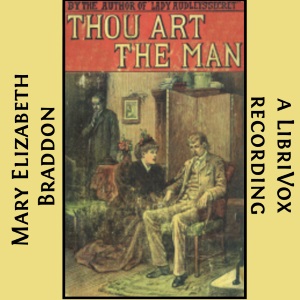 audio
Thou Art The Man

LibriVox recording of Thou Art The Man by Mary Elizabeth Braddon.

Read in English by beyondutopia

Sibyl married after assuming that her cousin, with whom she was in love, died. However, said cousin, who suffers from epilepsy, found himself near a murder scene and had no idea what happened. Fearing the worst, he ran away. Ten years later, Sibyl discovers that he is alive. What happened on that terrible night? - Summary by Stav Nisser

Reviewer: AnitaJ - - August 18, 2017
Subject: Can't wait to listen
Wow! This one was finished up so fast it didn't even get on my list of anticipated books from this author. Perhaps the PL had trouble keeping up? :) No rating, yet, but I have to say that I remember enjoying this reader's unique reading style when listening to the two Wilkie Collins books she helped read. Just slow enough and quite intelligible for this old distracted brain. Glad she ended up reading the whole thing because I prefer solo readings. I've just got a few other series-enders to listen to first. Just love these Braddon stories and there's dozens more to look forward to the reading of.
Reviewer: susan smith nash - favoritefavoritefavoritefavoritefavorite - July 27, 2017
Subject: The Heroic Self-Revelation of Coralie
Mary Elizabeth Braddon (1837-1915) is known for her sensation novels – novels written for all levels of readers, those grabbing a cheap book bound in yellow covers and sold in railway stations, and those serialized in popular magazines (one of which she founded and ran). They explored the dark sides and inner workings of Victorians at all levels: prim and proper professionals, landed gentry, impoverished women, people in desperate poverty, and they explore secrets and the question: “What on earth do you do if you find yourself in an impossible situation?”

I often wonder what kind of father Mary Elizabeth Braddon had. Her books are chock-full of absolutely amoral (if not immoral) fathers, who are frauds, imposters, scam artists, wastrels, cheats, bigamists, and, in some cases sociopathic murderers.

In Thou Art the Man (1894), the Braddon’s father figure plunges to a new low. He has used his friend’s fishing knife to stab a beautiful young woman to death in a dark grove simply because she rejects his proposal of marriage, which was motivated by a combination of self-interest (she had been promised a large dowry by her adopted (who turned out to be her real) father) and lust. The father figure, Hubert Urquhart, the heir apparent of an impecunious earl who married stunningly well, into wealth, beauty, and breeding, is a dissipated, gambling, vice-prone former cavalry officer, who is also a widower with a young daughter. Urquhart gets away with it because his friend, Brandon Mountford, whose fishing knife he used, suffers from epilepsy and has memory losses after his convulsions. Not surprisingly, when Brandon Mountford happens across the dead woman, the sight of it triggers a grand mal seizure. He comes to consciousness with no idea what has happened. He does not think he had any reason to kill – but Victorian psychology held that epileptic seizures turned people into demons (remember, this was the age of Dr. Jekyll and Mr. Hyde) who slipped into uncontrollable homicidal rages, that generally targeted lovely (and often hot-blooded) women who happened to stray into their way.

Three years later, Urquhart’s young daughter, Coralie, happens upon the aftermath. Mountford, thinking himself to be a ravening monster, runs away (with the help of the murderer, who wants to make Mountford look guilty). Sibyl, the wealthy heiress in love with Mountford, marries Urquhart’s brother, the earl, because she thinks that the community thinks that she was somehow part of the murder because she helped Mountford get away. So, in this loveless situation, she moves forward with her life, until a few fate-triggering incidences happen – she helps Urquhart’s unfortunate daughter and invites her to stay with her, and a mysterious note is delivered to her by a wild-eyed possibly mad vagrant.

I’m providing a little bit of plot summary just to give you an idea of how tangled and dark the webs are that Braddon weaves, and how every little sticky thread has a secret, a hidden past, a shameful horror, and a glittering prism of feelings, ambivalence, and confusion about one’s own identity and the identity of one’s loved ones.

Unlike many of Braddon’s earlier novels, in Thou Art the Man, it’s hard to know who is the hero. I maintain it is Coralie, although in theory, it could be Lady Sibyl. Sibyl is not as interesting, though, and even though she is the one who really solves the mystery of the murder, it is Coralie, whose ambivalence and questionable morality both problematize her and make her sympathetic. After all, she knows she is her father’s daughter, much to her growing horror.

So, when the story opens, we meet Coralie, who had been relegated to a finishing school, where she is constantly on the verge of being ejected for lack of payment, and whose clothes are so worn that she is mocked by her fellow students. By the way, this condition is nothing extraordinary in Braddon’s novels. I can think of at least a dozen teenage young women, talented and sensitive, who must bear the horrors of abject dependency on the good will of the female owner of a young ladies’ school. In Thou Art the Man, Urquhart’s daughter, Coralie, is rescued from this cold, humiliating limbo by Lady Sibyl, who gives Coralie a place to live and a dress allowance – just enough, as Coralie says, to keep her completely aware of her dependence.

And this, I think, is a good place to talk about what is really revolutionary and fresh about Braddon’s novels, and Thou Art the Man in particular.

Coralie’s voice constitutes a large part of the narrative. It’s not all of it, nor is the structure something like Wilkie Collins’s The Woman in White, which is, in essence, a series of letters, reports, and documents, none of which give us the calming “we live in an ordered universe” feeling of the omniscient narrator.

Coralie has her own thoughts. She innately distrusts (wise girl!) her father. When her father asks her to observe Lady Sibyl’s household and send reports, she decides to keep two journals: one for him, and one for herself. It’s fascinating to read her reports to her father, and then to read her personal diary and learn what she really thinks, and how she truly questions what is happening.

I’m not aware of any other novel that contains such a technique. What is interesting, too, is that Coralie herself has doubts about her own integrity. She readily admits that she tends to prevaricate, and that it is difficult for her to be transparent. The reader sympathizes immediately because the poor girl has been absolutely abandoned in the world except for a very damaged (and damaging) scion.

Darwinian ideas are alluded to in Thou Art the Man, and they are challenged at every turn. Braddon champions the idea of self-determination, and provides refutations at every turn of the over-deterministic notions that you are and must be the product (or consequence) of your perverse parental genes.

Secrets, deception, and hidden motives are standard fare in the Victorian sensation novel. In Wilkie Collins, the core dilemma is often a challenge to middle class mores and a secret longing for polygamy (or at least legitimized bigamy). The requirement for monogamy destabilizes identity and has all sorts of pernicious consequences; one being murderous tendencies, and the other, a sad longing for oblivion, usually in the form of laudanum.

Mary Elizabeth Braddon’s world is animated by secrets, but most are driven by the need to survive, and can be often excused as misdirected pluckiness. That is, except for the truly dissipated and scoundrel father figures, which are often undeservingly forgiven at the end.

In Thou Art the Man, perhaps the most satisfying moment comes when Hubert Urquhart meets his end. He is now an Earl. He is powerful. He is rich. And, he is miserable and in hideously poor health, thanks to years of vicious living. The fact that he murdered the one true love of his life and then murdered his own brother never escapes the reader; nor does it escape the reader that he is part of the British aristocracy.

Yes, Braddon is subversive, but not in ways that favor anarchy. She uses sensation to problematize hierarchy, and thus encourages her female readers to dream and to envision their own personal path to self-actualization and empowerment.

****
Just a quick response to TinkieToes’s review: Thank you. I am beyondutopia, and I read the book on Librivox. I held myself back – I thought that some of the passages were almost pleading for an exaggeratedly operatic delivery. Sensation invites the “camp” response. But – Coralie’s diaries and her realistic voice militated against high camp, so I read in what I thought was the most modulated and almost flat way possible. I’m a bit surprised that it was considered at all dramatic. Well. It’s good to know how others respond. At any rate, I’m very appreciative of the opportunity to read, and also of the positive response. Thank you.
Reviewer: TwinkieToes - favoritefavoritefavorite - July 21, 2017
Subject: Good story, valiant reader
I enjoyed the story. The murder mystery isn't much of a mystery; it's surprising that the main character didn't clue in sooner.

The reader is new, and as a new reader did a good job. She was dramatic, but not too dramatic. She was a bit slow for my taste, but that's better thn too fast, I think. :) There were a whole lot of pauses in the middle of phrases, some stumbles/repeats, and several mic bumps. I fault the PL for this. As I was listening, I wondered what the proof-listener had been doing instead of actually proof-listening. (These issues are a part of standard PL, so should have been pointed out.) I think the reader will improve with practice as long as she has a trustworthy proof-listener.